“A ship in harbor is safe, but that is not what ships are built for.” – John A. Shedd

For a considerable portion of my life, books have been my safe harbor. Who was I, after all? Corlis Fraga, a small fish from the quiet, northeastern corner of the United States. Books, on the other hand, were vessels of grandeur, full of adventure and possibility that connected me, small fish and all, to a keystone of humankind: storytelling.

It took time for me to discover that books were more than an intellectual haven to retreat to during my time at school, particularly while studying at the University of Connecticut for my undergraduate degree in Digital Media and Design. There’s nothing quite like seeing an illustration done by an ancient hand, or visualizing the shape of an imagined world left by a creative soul who passed well before my time. With so much of the world of literature still elusive to me, I realized that I wanted to know more.

I wanted to explore. 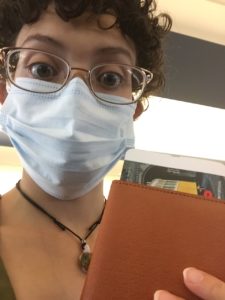 The moment I discovered the Université de Bourgogne Franche-Comté’s (UBFC) Rare Book and Digital Humanities master’s program, I couldn’t resist the voice in my head that said “that’s it”. The world of literature metamorphosed from a harbor into a ship that has transported me beyond the United States to Besançon, France. Whether the subject be Latin or Greek, the history of the book or the anatomy of its parts, or simply learning how to operate in a new country, UBFC’s program has pushed me to explore.

It can be daunting to think of the challenges ahead, improving my French chief among them. But, as with all things new, there is also wonder (enough to make it so I can’t yet decide which part of this master stands as my favorite). I’ve come to to the table, brand new, and struck by just how much there is to learn and the vast stores of knowledge my professors have to teach me: pictographs and the invention of paper, Xylography and the Jikji, Tranche de tête verses the Gouttière.

Going forward, I plan to build my knowledge on the craft of preserving manuscripts and the history of writing with the hope of applying that knowledge to working in a museum or other cultural institution tasked with the responsibility of ensuring that future generations have access to historic written and illustrated works, whether it be in a digital or physical format.

Going forward, I will not remain in a single, safe harbor.