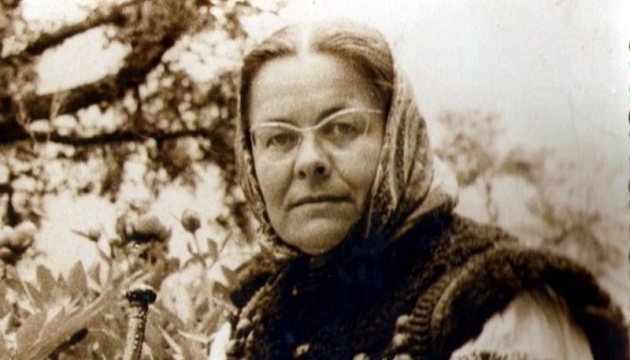 In a distant village in the Carpathian Mountains there ones lived a woman named Paraska Plytka-Horytsvit. For over thirty years she was photographing people and places where she lived.  Paraska was an extraordinary woman of her time. She was a writer, philosopher, photographer and an artist.

Paraska Plytka-Horytsvit was born in Ivano-Frankivsk region, Ukraine in 1927. She spent only 4 years at school, however she could speak several languages and always had an aspiration for knowledge. During the Ukrainian liberation movement of 1938-1950, being a 17 year old girl, she served as a liaison person in the insurgent army. Paraska was arrested and convicted by soviet regime to 10 years of imprisonment in a prison camp. She came back to her village of Kryvorivnia in 1954.  She worked in the forestry and lived a solitary life in her house until her passing away in 1998.

In 2015 artists from Kyiv found the box with her negatives and drawings and an impressive collection of hand-manufactured books. And so the story of the found archive began. The found photo archive contains 4000 pictures. She also spent quite a lot of time making paintings. Her style can be defined as so-called folk primitivism, also known as naїve art. Paraska’s writing legacy contains 46 manuscripts and printed books of 500 pages each, as well as over 500 small booklets with her own illustrations and improvised bindings. She compiled a dictionary of the Hutsul dialect, wrote stories, fairy tales and fantastic adventure novel. She also wrote diaries. After each book was ready, Paraska designed it with hand-made decorations and painted illustration.

Books, produced by Paraska Plytka-Horytsvit are unique items, existing in a single copy. Yet being manufactured by one person singlehandedly, they are featured by high quality and artistic value. Books created by Plytka-Horytsvit can be considered as rare books and could become the object of research in master program of Rare Book and Digital Humanities.

While the photo archive has been already digitized and properly organized, the book archive still needs a considerable amount of work to be done on it. I have established connection with the team that currently takes care of Paraska’s archives. They kindly offered me their help and cooperation in studying the book archive. This work will become the topic of my master research and actual physical project that I am going to implement. My aim is to study the collection of the books, describe and categorize them by styles and subjects, define the tools and methods, used for their manufacturing, etc., to build up a structure of what can be called “the world of Paraska’s writing”.  The results of my work can be used for future publications and expositions and will help the workers of the museum created in the house of Paraska Plytka-Horytsvit to better keep and preserve the unique legacy of the artist.

After her conviction and imprisonment, Paraska had no chances to become a recognized artist in the realia of Soviet Union, to be published or exhibited. Nonetheless, she devoted her life to art and never stopped creating process, until the latest years of her life, when blindness didn’t allow her to continue the work. Living a lonely life, Paraska called her books her children and truly believed that art makes the soul free. “When you are free in your soul, your body can fly too” – she used to say, ­– “book enables person to fly”.