Although typography was born in Germany, it found fertile breeding grounds in the 15th-century Italy. Very quickly after the invention of printing, Italy became the most dominant producing power of the times due to multiple reasons. The political and state organisational structure in accordance with the flourishing economy and banking system were allowing and facilitating the adaption and dissemination of the novel product, the printed book.

At the same time, Italy was the center of intellectual pioneers of the time, the humanists who contributed to the increase in demand of books. Humanistic culture tried to ignore its natural ancestor, the medieval times, choosing Antiquity as its parent in order to place the central emphasis of education on the human realm. For instance, humanists like Petrarca or Valla were devoting their lives to the study of ancient writers and they were trying to better understand the human being within the framework of philosophy and Christianity.

Before the end of the century, around 80 cities were hosting printing offices leading to publication which had starting resembling morphologically more to the book as we know it today than at the manuscript codex (i.e. existence of title page, pagination, printed ornament letters etc.)

Except of humanists, the market had already understood the importance of literacy. The correspondence between merchants to document what they were sending and where, was the only way to distribute the products and be sure of the profits. Due to these written sources, the key role of merchants in book history is proven. These factors were leading and are related with the change in reading culture and the dissemination of texts worldwide.

The most famous and prolific publisher of the time is Aldus Manutius who wasn’t just a merchant or a good printer but a fastidious scholar who wanted the public to have access to the pylons of philosophy and science.

His editions were aesthetically pleasing and “academically”

edited to present a good version of each selected work.

His efforts were extremely successful since

his editions are hosted today in libraries

all over the world. 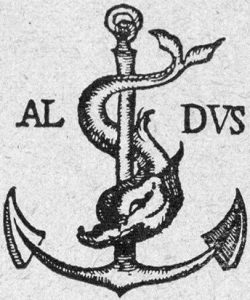 Since more than 10.000 incunables were printed in Italy, we can easily say that the “way to make a living” through the trade and the life-devoting study of (ancient) texts create the best environment for book publishing.